This page lists the Publications produced by the
Heritage Group between 2007 and 2017.

Information on purchasing these, and later publications,

Based on an article written by Enid Parker

This booklet recounts the life of Thomas Nuttall

It recounts his extensive travels and explorations in America and illustrates some of the plants and birds which he discovered and which have been named after him.

A sixteen page, A5 booklet, with colour photographs.

An extensively illustrated booklet which explores the many, often unnoticed, designs and patterns which are under your feet when you walk around Long Preston.

A twenty four page, A4 booklet, with over fifty colour photographs.

An exploration of the historical records to show how the North Craven landscapes and townscapes have evolved over the past centuries to what we see today.

Five townships have been included in the study - Settle, Giggleswick, Long Preston, Rathmell, and Burton in Lonsdale - together with the settlements in Langstrothdale and Littondale.

The book contains over 120 colour maps and photographs, illustrating the text, together with many tables of data and has a full list of references to the source records and an extensive bibliography.

A hundred and fifty six page, A4 book, with colour diagrams, maps and photographs.

“Letting in the Light”

by Jackie Hunt and Gill Jones

An extensively illustrated booklet giving the history of the Capronnier windows in the Church of St. Mary the Virgin in Long Preston, and recording the recent design and installation of a new stained glass window in the Village Hall by Jackie Hunt.

A twenty page, A4 booklet, with over thirty colour photographs.

All proceeds from the sale of this booklet will be donated to St Mary’s Stained Glass Window Restoration Fund.

- the Anniversary of the

A booklet recording how the arrival of the

Includes maps of the growth of the villages,

charts showing the types and volumes of rail
& goods traffic, and old photographs.
A twenty one page, A5 booklet, with colour diagrams, maps and photographs.

A walk around
Long Preston

A brief history of the village and

illustrated guide to the
interesting historical features of the older buildings.

A ten page, A4 booklet, with drawings of selected features of the buildings.

Eight Walks in the
vicinity of Long Preston

Illustrated guides to eight circular
walks from the village,

Ranging in length from 2 to 9 miles.

Eight separate, A5 booklets, with detailed descriptions of the walks and a colour map of each route.

A video recording of the Re-dedication of the
Bells of St Mary's Church service, from April 2009.

The second is prefaced by footage of the bells being removed for repair, and then returned to the church tower, followed by the full Service in St Mary's, with a full congregation led by the Bishop of Bradford and the Reverend Rachel.

Both items are in colour, the first is silent,

the second with stereo sound.

Both are in 4:3 format - the standard TV format

(not wide-screen).
The total playing time of the DVD is 100 minutes.

A booklet discussing the detailed history of Long Preston and the occupations of it’s residents.
It examines the records from the Domesday to the early stages of the Industrial Revolution.

Included are detailed Tithe Maps & Surveys together with tables of land holdings,
the tenants and occupations.

A sixty four page, A5 booklet, with colour diagrams, maps and photographs.

A fascinating account of the war years in Long Preston by Robert Slater, who was a young boy at the start of the war. Robert has always been an avid collector of photographs and ephemera relating to Long Preston, and he draws on his extensive archive to relate this period in the history of the village.

A forty five page, A5 booklet, with colour photographs.

by Tony Stephens and Gill Jones

Part one provides an overview of the important national and other local influences that changed both the physical and social character of Long Preston during the Victorian period. In many respects this overview is relevant to other settlements in Craven.

The second part focuses on specific buildings and their contribution to the development of the village. There are 33 sections that detail individual buildings and places of interest. There is a wealth of information about owners and occupiers of these buildings during the Victorian period that will be of interest to present owners of the buildings explored.

A ninety four page book in A4 format. The book contains several maps and diagrams and over 70 photographs of the buildings and places referred to.

A History of Medicine
in Long Preston

This booklet discusses the history of medicine with particular reference to Long Preston.

The author records the earliest doctors in the village and gives a fascinating account of early medical and sanitation conditions.

A thirty eight page, A5 booklet,

By Gillian Jones and Janice Simms

This booklet begins with the Church of St Mary the Virgin, originally a Catholic church until the Dissolution of the Monasteries in 1539.

The first non-Conformist building was the Wesleyan Chapel in a former barn, converted to its religious use in 1804. This was followed by the construction of the Baptist Chapel in 1833. The Temperance Societies also played an influential part in the life of the village in the second half of the 19th century.

A fifty page, A4 booklet, with colour photographs. 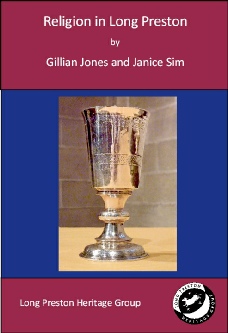 Bolton Priory and Skipton Castle are amongst two of the best known and most visited historical sites in North Yorkshire. Both have a big story to tell, but often, each is appreciated only in isolation.

Imagine how much bigger the story could be if the two were linked. Add a small village of just 700 people called Long Preston, with its church of
St Mary, and the story just gets bigger and better.

This booklet sets out to explore the links between all three sites. In doing so it uncovers a 500 year old chalice still in use in 2014, identifies some of the oldest stained glass in Craven and explores the involvement of a famous, but more distant institution, Christ Church College, Oxford. Introduce Henry VIII, and other famous characters, and you can see why there is a tale to tell and a story worth reading. 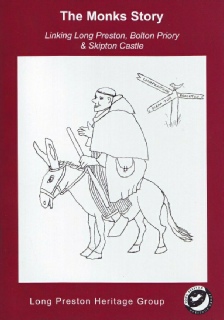 A thirty eight page, A5 booklet,

on the village of Long Preston.

This book covers a wide range of topics relating to the First World War.  Extensive research into old newspapers & documents, together with information from the family archives of many residents of Long Preston; has resulted in a book containing a fascinating record of the lives of those who fought in the war. and of those who stayed behind to keep the farms and businesses still running.

One chapters describes the Recruiting Process and provides information about those who went to fight
and those who were lost. Other chapters cover the making and supply of Home Comforts for the soldiers and Letters from the Front, village affairs and food. 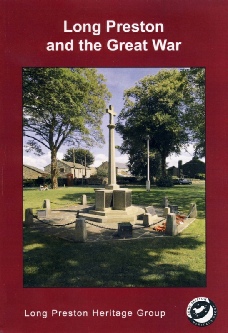 Between 2015 and 2017, LPHG conducted a thorough archaeological project in the village. The original aim was to find the Anglo-Saxon origins of the village through
a series of test pits.  This way of research was proposed by Dr Carenza Lewis of Cambridge University, formerly of Time Team. Carenza is now a Professor at Lincoln University.  The technique has been used successfully many times, although mainly in the East and South-East of England.

The digs have shown much more interesting results than hoped for. Evidence of habitation in the village goes back to just after the end of the Ice Age when man was re-settling in the area. This was in the Mesolithic period around 8000 years ago. It seems that there has been habitation here in the Neolithic period, Bronze Age, Roman times and all the way through Anglo-Saxon and Medieval periods to the present day.

Two books have been produced. The first, by Dr David Johnson as archaeologist, is
a full report on what was found, where and what it means. It also explains the background to the project and how it was carried out. It is a fully researched book of 148 A4 pages with tables, colour photographs and maps.

The second book produced, Digging Deeper by Ian Evans, is a general reading book.
It also gives the results of the project but much briefer and tries to set them into context.  It has chapters on the geology of the early earth and how our area and landscape came about. It also has chapters on how life, primates and the various species of man developed as well as the history of Britain and our area to 1066AD.
It has 83 A4 pages with colour pictures and maps. 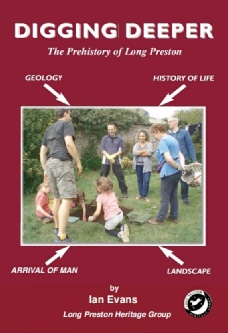 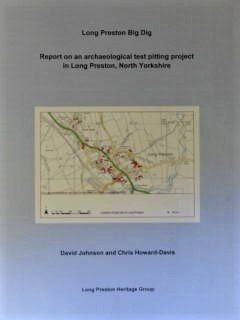