Surviving croft lands surrounding the village can be traced back to Domesday. In 1086 Long Preston was known as 'Prestune' - the priest's farmstead or town. 'Long' was added later to distinguish this settlement from the many other Prestons and refers to its linear development.

In June 2008 the Heritage Lottery Fund awarded a grant of £47,200 to restore the historic bells in the Church of St. Mary the Virgin in Long Preston, and to uncover the history of the village. The history part of the project is to last 5 years.  Click here for details of the grant.

The aims of the project are as follows:

Involvement of the community in their heritage.

The Long Preston Heritage Group was formed as an official body to control the Village History part of the Project and operated as co-partners with the Parochial Church Council in managing the project.

We have organised a wide range of talks and presentations, and also hold social as well as educational events. Groups have developed to collect oral history, to prepare walks, to research the history of the village, the farms and the railway, to map the Victorian village, to collate old photographs and documents relating to the village, and to arrange publicity & publications on these subjects.

The activities of these Groups are recorded on this website  - see the MENU in the left margin.

If you would like to get involved then see bottom of this page.

Click here to see  The Constitution  and  The Committee

We have a number of publications for sale.
These cover the history of Long Preston and of North Craven,
the early railways in the area, other historical features in the village, and walks in and around the Village. 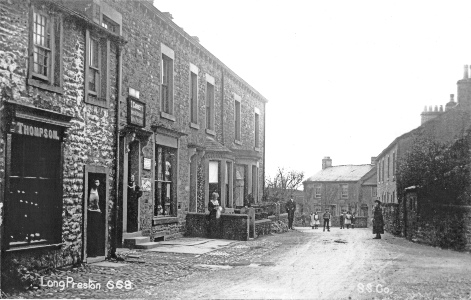 A rich variety of  records survive for Long Preston, providing insights into the history of the township in the late medieval period. Particularly important are the records of Bolton Priory, which had substantial financial interests in Long Preston between the 14th and 16th centuries, and the manorial records of the Earls of Northumberland and Cumberland.

Land purchased by Bolton Priory, to endow Long Preston church in 1304, were re-let to former monastic tenants by the Earl of Cumberland following the Dissolution of the Monasteries and remained in the hands of the direct descendants of the monastic tenants until the 18th and 19th centuries.

The archive records of old local newspapers are another valuable source of information relating to Long Preston, and these are being actively researched.

Long Preston was a major centre of the droving trade in the early 18th century and has had a long heritage of cattle and sheep farming up to the present day. 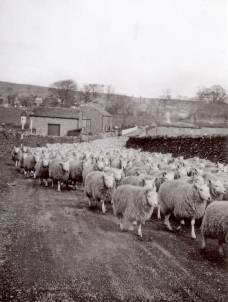 The monks, the beams and the cow that jumped over the Moon.

in support of the BBC’s The Great British Story – A People’s History, presented by Michael Wood, the new series will be broadcast on BBC2.

We have been given £8,300 from the Heritage Lottery Fund for a new project
to do research into the links between Long Preston and Bolton Priory.
The money can only be spent on things included in the approved bid.

Further details can be seen on the Monks & Beams Page.

The Long Preston Heritage Group has recently been awarded £9,900 from the Heritage Lottery Fund's  First World War: Then and Now programme.

The project will focus on raising the profile of the part Long Preston played during the  First World War. We would like to borrow or copy photographs, newspaper clippings, documents, letters and photos of keepsakes, as well as hearing family tales so we can build a clearer picture of what life was really like in the village in 1914.

The Long Preston Heritage Group has been very active since its inception in 2007, exploring the history and heritage of the village. A lot has been done and we need to thank a number of funding organisations for their help, principally the Heritage Lottery Fund, the YDNPA, the Millennium Trust and the Quarries’Aggregate Fund. Also, we couldn't have done so much without help and support from the Parish Council, the Churches in the village, the Village Hall, the Women’ Institute and all the local businesses and people who have given their time, services and helped in our own fund-raising. Unfortunately, there are too many to mention.

On history, very little had been published until the Heritage Group started.  You can see what has been achieved here from our list of publications. We have built on what was known and now have a fair bit of knowledge back to Domesday. The first major project was the Bells Restoration, then the Monks & Beams Project, followed by the World War 1 project, funded by the Heritage Lottery Fund, which concluded in 2014.

If you live in the village, you may have seen the restored War Memorial, been to its rededication and thought about those who died whose photos were for a time displayed on the Memorial. You could also have been to one of the events organised for the project or seen the new permanent Memorial of framed photos in the Village Hall. The latest project into the history of the village is The Big Dig, throughout 2015 with analysis of results during 2016.

The oral history of residents is still continuing and you can listen to these as they go on our website. In May 2011 we hosted the Yorkshire Vernacular Buildings Group study weekend and arranged for a number of houses and barns to be surveyed by them. This in turn helped support the survey we did of traditional farm buildings for the YDNP from 2011 to 2013.

On heritage, we have also done lots, often in association and with help from other village groups, individuals and local businesses.  Areas of the village have been improved – the former Baptist Chapel site with its graveyard is now in public ownership and protected for the future. The money to buy this land for the village was raised from our own fundraising events. The small Millennium Green next to Maypole Green has also been improved and benches installed.

An Open Gardens event has been held with some people coming from many miles away following advertising in the National Gardens Scheme.  A large stained glass window has been installed in the Village Hall. The design came from suggestions from villagers and the fish were individually designed by our primary school children.   A lot of villagers helped in its construction, learning stained glass techniques along the way. A large model of the railway station from the 1920s was donated to us and now graces the Village Hall. Our office is also here; a former cloakroom converted by volunteers.

Many social events such as themed Big Band nights and exhibitions have been held and walks organised. Village pantomimes have been actively supported as well, including the upcoming 2015 production. A new entrance stone to the village has been put in. And so on.

The village is lucky to have so many people willing to give their time and support not just to the Heritage Group but also to all the other village groups who work so hard to make this a wonderful place to live.